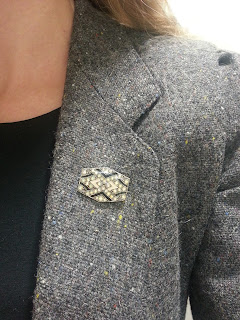 So you've gathered by now that I always wear my sunnies!  If they're not on my face then they're on my head!

I love this outfit.  I wore it to work for an impoartant meeting with one of our contractors.  I think it looks smart but with added personality, I'm clearly not just another 'suit'!

The blazer was a gift from a friend, she'd bought it for herself but it didn't fit so re-gifted it to me.....and best of all, it was from a charity shop!  The first time I wore it I got made redundant.......but that was in fact one of the best things to ever happen to me!  So I named it, The Redundancy Blazer!  I love that it's grey but with lots of colourful flecks, and it's nice and warm too.  Plus it has the most beautiful tailoring, which you can't tell from my geurilla photos!

The vintage brooch was a gift from The Boy, it's beautiful.  It's by a French designer called Pierre Bex.  Pierres work is all in an Art Deco style (my favourite era) and every piece was made in France between 1960 and 1980.  Since then The Boy has found a couple of other pieces........mostly from car boot sales and charity shops.  He has a good eye for these things.

I find work trousers so difficult, they're so boring!  And not only that but I've got a 34" inside leg so it's difficult to find them long enough.  These ones from Mango are not only long enough but comfy enough to cycle in too.  I prefer to wear this blazer with skinny jeans but it does wonders for plain black trousers too.

Do you have a staple piece of clothing which goes with everything?

It's almost the weekend, hang on in there my lovelies. xx

Email ThisBlogThis!Share to TwitterShare to FacebookShare to Pinterest
Labels: Blazer, Outfit of the Day, Pierre Bex, The Boy, Vintage