Beautiful Toronto and Those Who Reside Therein! 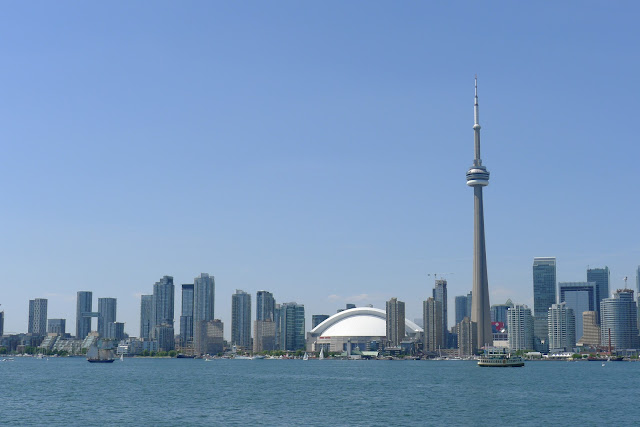 So The Boy and I are back from our AMAZING trip to Toronto.  I’ll warn you now, this is going to be a long post, I hope you’ll read to the end but please feel free to just scroll through the photos!

Our trip to Toronto started by stepping back in time!  We booked cheap flights on Air Transat and when I stepped on the plane it was like my trip to Toronto 24 years ago!  No personal entertainment here…….just those TV’s that run down the centre of the plane with no choice of what to watch.  That said the flight was actually pretty good, probably one of the most comfortable I’ve been on.  With it being an older plane I think we got a little more leg room (not like nowadays where they squeeze as many seats in as physically possible!).  I kept myself occupied by reading some Broad Norfolk Poetry and dipping in and out of the on-board entertainment. 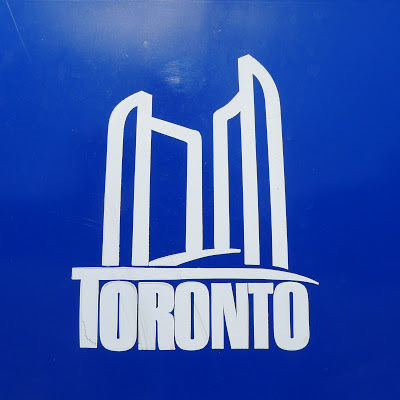 We arrived in Toronto to the most loving greeting from my Uncle & Aunt (Merv & Jackie), it was so nice to see friendly faces waiting for us.  We picked up my cousin Jacob on our way home from the airport and were treated to an amazing Lebanese feast prepared by Jackie.  We managed to stay awake until 10pm until finally the jet lag set in and it was promptly off to bed.  The next morning my friend Stuie came to collect us and we set off for a weekend away at Fiddlehead Farm in Prince Edward County.  Stuie friends own this farm with a holiday let on site.  Roxy The Cat also accompanied us, and apart from one incident, was very well behaved on the 2 hour journey.

Fiddlehead farm was amazing, totally and utterly beautiful.  Stuie's friends Ron and Alan own the farm, which is run by Alan's son Steve.  Ron, Alan and their friend Bobbie joined us for the weekend and provided us with a very warm welcome.  The farm is 24 acres and is only in its second year of ownership by Ron and Alan.  Not only do they grow veggies but they are also rearing pigs, chickens, ducks, turkeys, and have 4 barn cats and 2 dogs.  Our weekend was full of laughter, food, sun, animals, fun and happiness. 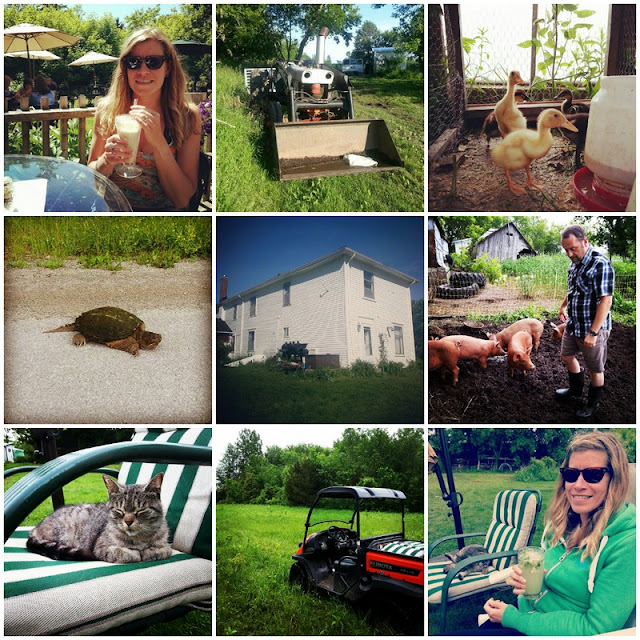 During our stay we also managed to visit a couple of wineries and a cidery, after one or two wine tasting experiences it appears that I do indeed quite like wine again!  Prince Edward County is an up and coming Wine area, following in the footsteps of the long established Niagara area.  With the beautiful countryside, the idyllic settings and the most beautiful tasting rooms the wine tasting was a real treat.  We visited Keint-He, Karlo Estates and Waupoos Cidery.  My favourite tipple had to be the Riesling from Karlo Estates…….Needless to say that between us a fair amount of alcohol was purchased! 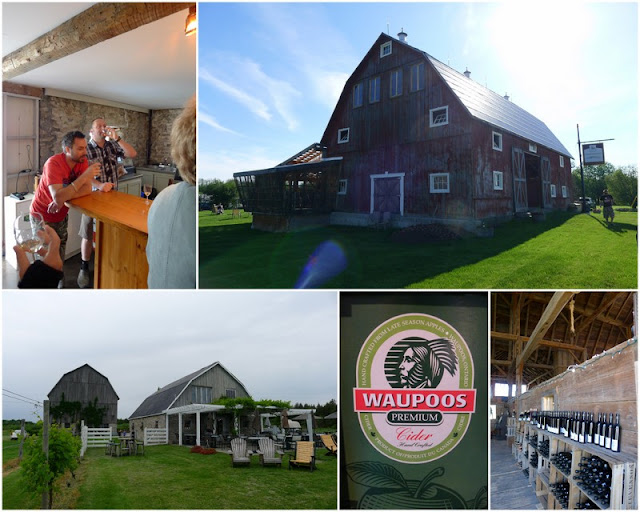 We also visited Sandbanks Provincial Park, home to the best beach on Lake Ontario.  A beach on a lake I hear you say…..yep, that’s right….and pretty odd it was too.  Lake Ontario is one of the 5 Great Lakes, and standing on the beach you could be mistaken in thinking that you were actually looking out to sea……there were even a couple of small waves breaking on the sand!  Sandbanks is beautiful and we were incredibly lucky to have clear blue skies and sunshine.  The rains of recent weeks had however turned small areas into slightly swampy ground which made our walk pretty interesting at times! 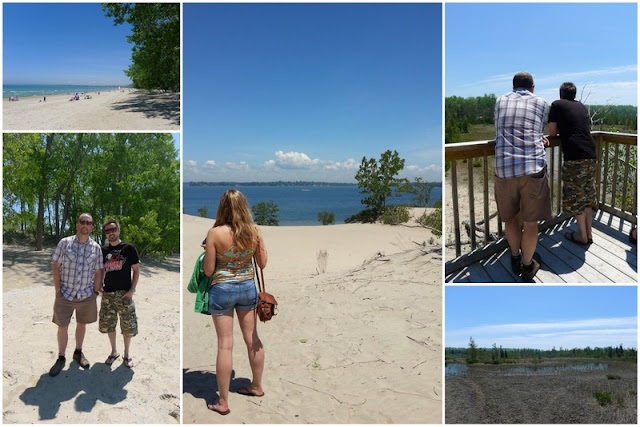 The Boy and I love all things second hand….one mans junk is another mans treasure and all that.....and we even managed to fit in a yard sale and a trip to a second hand shop during our stay in Prince Edward County! 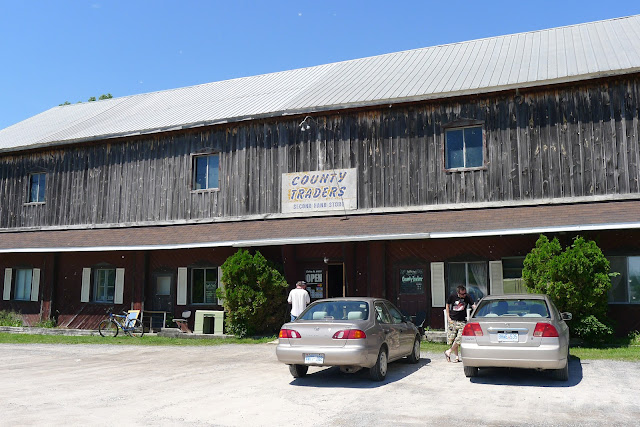 Back in Toronto Merv & Jackie kindly took the day off to take us to Niagara Falls and Niagara on the Lake for the day.  I went to the Falls 24 years ago as a 9 year and I can safely say that are just as impressive at the age of 32 as there were back then.  I’ll let the pictures of the falls do the talking…….if you are ever in the vicinity you must go!  We did the Tunnels Behind the Falls experience, a series of tunnels dug out of the stone beneath the falls during Victorian times (Victorian times!) and the thunderous noise of the water cascading over the edge and hitting the water below was immense!  Niagara on the lake is beautiful, it being Wine Country meant that another wine wasting session was essential! 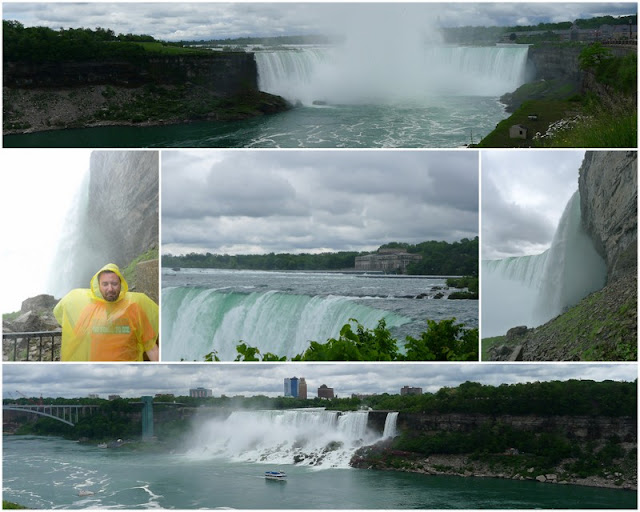 Having been in Canada 5 days and not yet venturing into Toronto itself we made our first trip downtown and headed straight for the CN Tower.  I regretted not going up when I was 9 so 24 years later I was definitely going up......AND I was definitely going to stand on the glass floor.  We were last to jump in the lift and I looked around not to see any glass panels.....then we went up and I realised I was pressed on the glass panel facing out (not great if like me you don't like heights!).  So I figured I'd just look down......big mistake, I was stood on a glass panel too!!!!  With that I decided to look out and enjoy the view.....my grip on The Boy ever tightening as we ascended!  Once up I was fine and we had a great walk round, inside and out, and enjoyed the view.

Back inside we headed for the glass floor.  The Boy went first and said it felt really weird and he didn't like it.....great I thought, there is no hope for me!  I took a few deep breaths, a few more....and huffed and puffed, and got talking to a stranger who was suffering the same dose of 'I can't do this but I'm not leaving here until I have'!  He said shall we do it together?  I grabbed at the opportunity and said after 3......3....2....1.....GO! And out I stepped straight onto the glass floor.......shouting at The Boy to quickly take photos...documenting this crazy momentous occasion!  It felt very wrong and I stood static until the photos were done and quickly jumped off.....the stranger?.......well he was walking around, looking down, taking photos, no problem at all.  I wonder, was he a 'facilitator', an employee in civilian clothing there to help people who were too nervous to do it on their own?  I hope not, it was such a special moment, but that said I couldn't have done it without him so what does it matter. 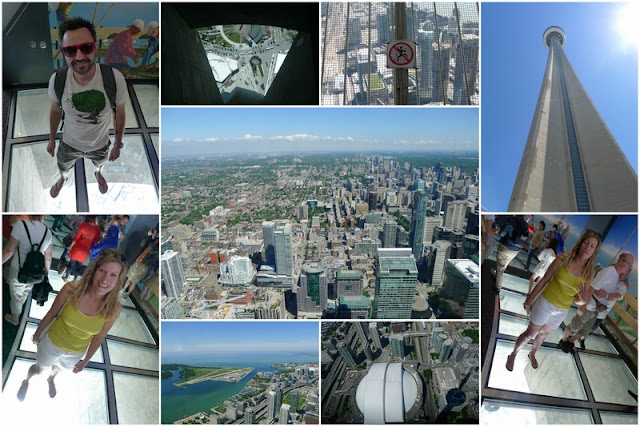 We spent the rest of the first week downtown, exploring various shopping areas, meeting Stuie for lunch and evening drinks, and enjoying what Toronto had to offer. 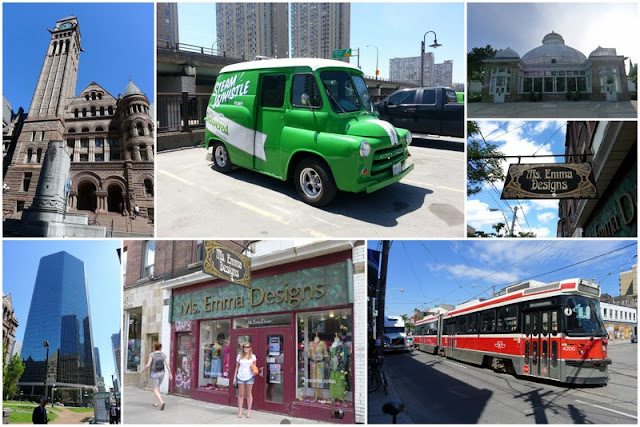 On Friday Merv & Jackie took us to the extended families cottage on Belmont Lake.  It was just over 2 hours drive NE of Toronto in an area known as the Kawarthas.  It was stunning!  We spent all day Friday, Friday night and all day Saturday here.  I didn't want to leave!  We were treated to amazing food, amazing company, the most beautiful views, boat rides, drinking at the Bunki-Bar, eating s'mores by the campfire, but my favourite bit of all.......going out on the lake after dark and laying on the boat looking up at the stars!  Utterly, staggeringly beautiful! (another of my favourite moments, spotting my first firefly, flickering around the garden). 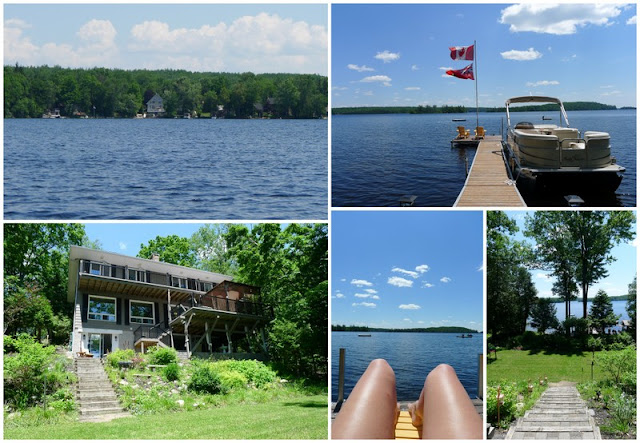 Back in Toronto we headed to St Lawrence Antiques Market on Sunday Morning......The Boy picked up a 1958 Coca Cola cooler (for note, we upgraded our plane tickets to option plus and took the cooler as an additional piece of luggage! The Boy is a genius!)......my purchase was a little smaller!

At this point Merv had to leave us and go on a business trip for the rest of our stay, so we said our goodbyes and pondered on when we would get to see him next.  On the Monday of our final week we were treated to a visit to the Rogers Centre (I'll always know it as the Skydome!) to see the Blue Jays take on The Colorado Rockies.  After some pointers on the game of baseball from Merv & Jackie a few days earlier, and watching the Blue Jays on TV winning every game since we entered the country we were pretty excited.  It was awesome, a tense game with scoring only in the 8th and 9th Innings! I wanted to go EVERY night!  We were hooked!  Lets Go Blue Jays! 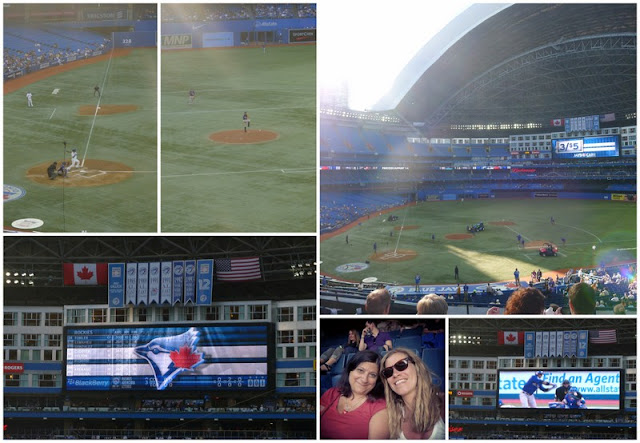 On the Tuesday of our last week we met up with my long lost Ukrainian relative, Lena, who knew my Dad before emigrating to Toronto when she was a teenager.  She now lives in Knoxville but spent many years in Toronto so she decided to spend a few days in Toronto whilst we were there.  We got a tour of the CBC network, where she used to work and still has many friends, before grabbing lunch and then heading to The Beach.  It was great to see her and catch up.  It's so amazing that she is back in our lives (the only people I knew with my surname until I met her was my Mum, Dad and Brother!) 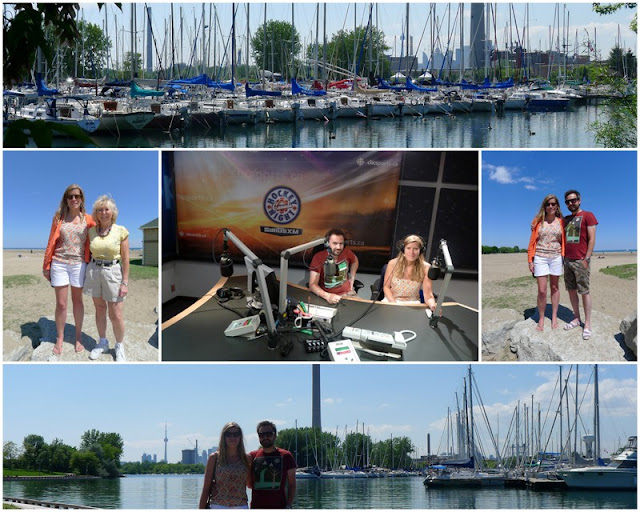 We spent the final week checking out some of the other areas of Toronto, including Kensington Market, Parkdale, Leslieville, The Distillery District, and much more.

AND we came across what is now my favourite animal.......Mr Raccoon! 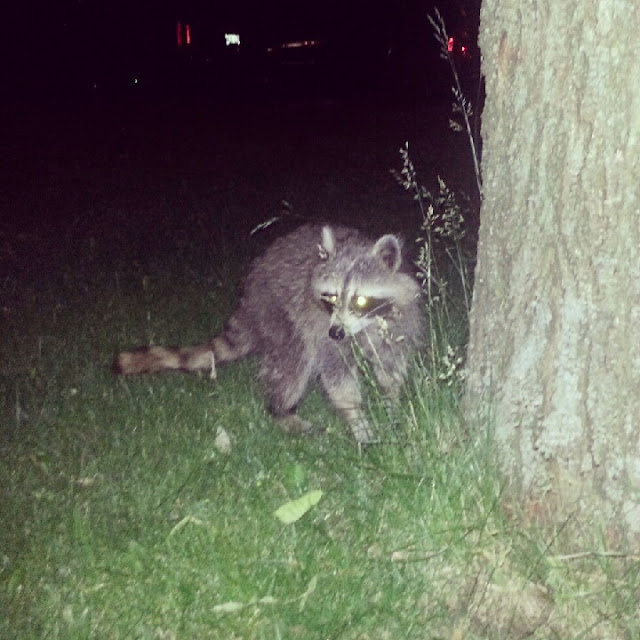 What an amazing trip, I really felt at home; seeing Merv and Jackie's friendly faces most days, lunching and socialising with Stuie, making new friends in Ron, Alan and Bobbie, chatting and going to the baseball with Jacob, hanging with Lena......it really was pretty special.

Jackie kindly took us out for lunch on our last day and then took us to the airport.  We decided to simply say 'see you later'.  Leaving was difficult!  It was made slightly easier knowing that we'll see them in a years time at my Brothers wedding, but none-the-less it was a pretty solemn flight home.